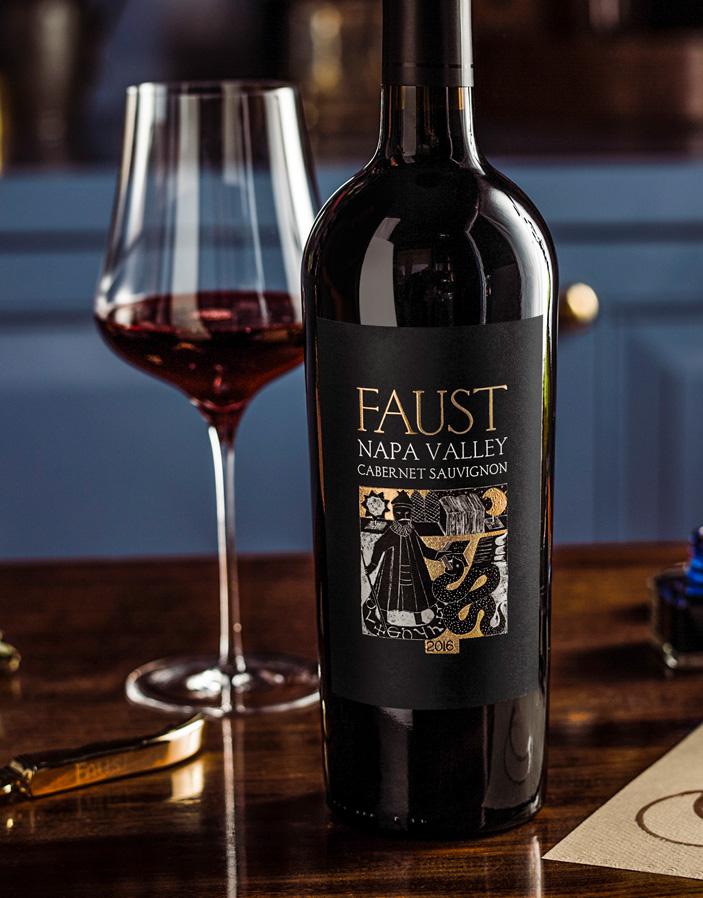 The Disneyfication of drinking destinations all over the world leaves much to be desired for design-minded visitors. While palates may be pleased, many wineries still have undesirable visitor centers and tasting rooms. Napa Valley winery Faust developed their new St Helena property, Faust Haus, (located 30 minutes north of their Coombsville vineyard) as an independent entity. In fact, when we spoke with them, the Faust team avoided directly defining the function of Faust Haus. It is a hybrid information hub and tasting tour, but also spotlights the talents of dozens of architects, landscape and interior designers, photographers, artists, historians and vintners.

“We put in a lot of thought with all of our design partners into how we bring this old, traditional Victorian to life in a modern way that reflects Faust,” the winery’s Estate Director, Jen Beloz, tells CH. Rather than build a new property on the grounds of their primary vineyard, Faust opted for the mysterious, Victorian home (with a Prohibition-era cellar downstairs) situated on a hill above a 100-year-old olive grove. “We wanted to do it in a subtle, artistic way. Not in the traditional way. Wineries often focus on photographs of the winemaking process or photographs of the vineyard, but the Faust Haus isn’t inspired by wine or grape attributes but rather telling a story. [Faust] represents this battle between good and evil and light and dark, and the design team embraced that throughout.”

Faust and its labels reference Christopher Marlowe’s Elizabethan tragedy The Tragical History of the Life and Death of Doctor Faustus. Napa Valley-based artist Michael McDermott created art that retells the tale, and it appears on the winery’s eponymous Cabernet Sauvignon, an awarded and widely available bottle. Furthering this theme, the Faust Haus has darker rooms on the ground and basement levels and lighter areas as visitors ascend the building’s stories.

A two-story wall mural by Italian artist Roberto Ruspoli toys with this tension, too. It begins as white paint on a black wall but flips when it reaches a middle point. “It’s a beautiful mural that transcends the dark and the light and grows into this white, bright open space. It feels different when you’re downstairs versus when you come up. It’s always impressive when design makes you feel something. Art stirs feelings and emotions,” Beloz continues.

Beyond the contrasting staircase, this duel between dark and light remains. Interior design firm Maca Huneeus Design (aka Maca Huneeus and Ona LeSassier) painted rooms in rich hues—reds, blues and blacks—and found seating and decor to match. They did the opposite upstairs, where sunlight illuminates the top levels from all angles—and natural wood elements are employed to match. Revolver Design founder Michael Webb offered lighting fixtures. Architectural Resources Group principal Naomi Miroglio assisted with preservation efforts. Conceptual artist and photographer Lindsey Ross produced tintype portraits of Faust employees and the Coombsville grounds—though she processed them to appear as though they were dug up during the renovation.

“We strived to subtly reinforce the Faust story through design,” Beloz tells us. “Even the landscaping is that way. It’s very red near the bottom but it fades to white as you near the house. It also goes from darker colors up to lighter colors.”

Outside, there’s ample room for gathering (when possible to do so once again), but for now tables are spread throughout the courtyard—some tucked under trees and others perched on glass ledges overlooking the grounds. On the hill, concrete elements create bleacher seats for overflow. Just below, pathways lead back to the property’s keystone: the Prohibition-era cellar, where the original owners made and stored their own wines hidden in the house’s stone foundation. It’s here where architecture studio Aidlin Darling Design emphasizes the house’s historic elements.

Stone walls flank an impressive rack of Faust wines, while leather and velvet seats surround a tasting table. Wooden shelves house books, objects and a record player, providing entertainment and an ideal backdrop for art activations, conversations, musical performances and more—once Faust gets the green light to begin planning them. The same goes for tastings and tours, which are available to book now but will be more robust once restrictions lift.

“Because of COVID, we’ve been hosting people outside and we’re fortunate to have that. But we do like bringing people into the house when they’re interested. It’s a really special thing and for us, to have a home for Faust that was once literally someone else’s home,” Beloz says. Faust acquired the house in 2016 and the team worked tirelessly to make it their own. Even though the winery sits miles away, St Helena is their new idyllic second home and they put in the effort to make it feel as such—the acquisition of a 1960s Jean Lurcat tapestry included.

“We have strong vision for Faust and our wines and what we believe them to be,” Beloz continues. Faust Haus also acts as the first-ever official site for the wine’s public tasting, despite their first vintage being released in 2002. Here, they hope to offer the perfect setting for their collection of Cabernet Sauvignon. “There’s a lot that goes into whether you like a wine. All of the different senses impact the moment you experience [the wine], and we’re fortunate to have a space where there was a lot of thought put into the design,” Beloz says. Though the wines are excellent in all kinds of settings, Beloz believes the property’s allure adds value. “It’s about the environment and the people you are with.”